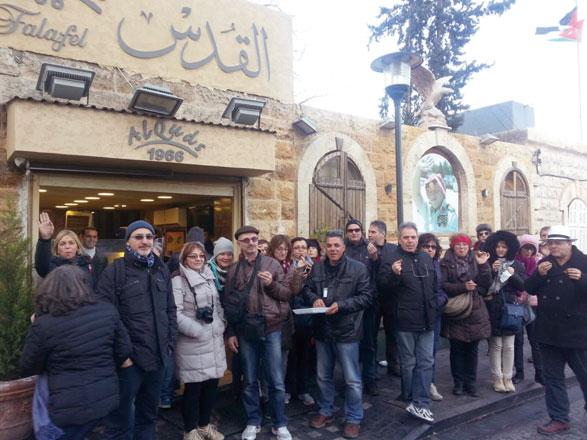 AMMAN — The recent Royal visit to Al Quds restaurant went viral on social media, emphasising how much the tiny, but well-known, restaurant has grown since its establishment in 1966.

During the stop, the King ordered falafel and waited, exchanging cordial conversation with the restaurant’s staff and customers.

The restaurant started its journey in 1966 and has since served falafel to generations of Jordanians and guests, Adib Rasas, the owner, said.

Princess Salma and Prince Hashim came back the next day to have another breakfast, Rasas told The Jordan Times.

“The restaurant was also honoured with a visit by the late King Hussein back in 1984,” the owner said, adding that several international figures and senior officials have eaten at his restaurant.

Former US president Bill Clinton, UK secretary of state for foreign affairs David Miliband, the Dutch foreign minister, the governor of Utah Gary Herbert, former US ambassador to Jordan Alice Wells and others have also visited the eatery, according to Rassas.

The restaurant rose to fame because it is one of the oldest in the Kingdom, and it uses quality ingredients and treats costumers well, said the owner.

Recalling eating there in the 1960s, Abu Salah, a Jordanian citizen, said he used to enjoy breakfast there with his classmates every other day.

“My father used to give me 2 piasters everyday, I spent a half and saved the rest to share a meal for 3 piasters with my friend. The meal included a dish of hummus, pickles, tomatoes and onions, and falafel,” Abu Salah said.

Fifteen years after moving to live in Jerash, Abu Salah still goes to Rainbow Street every now and then to enjoy a meal at Al Quds.

“My father, who is the founder, is currently an inpatient at the hospital. Hearing about the visit, he wept for having missed the opportunity to see the King at his restaurant,” the owner said.

Unfortunately, Hani Rasas, the founder, is now physically unable to run the business. Nevertheless, his son has taken the helm.

Al Quds restaurant now has three branches; in Dubai, Abu Dhabi and Austria, Rasas noted, adding that a new branch will opened soon in New York and will be named “Amman”.