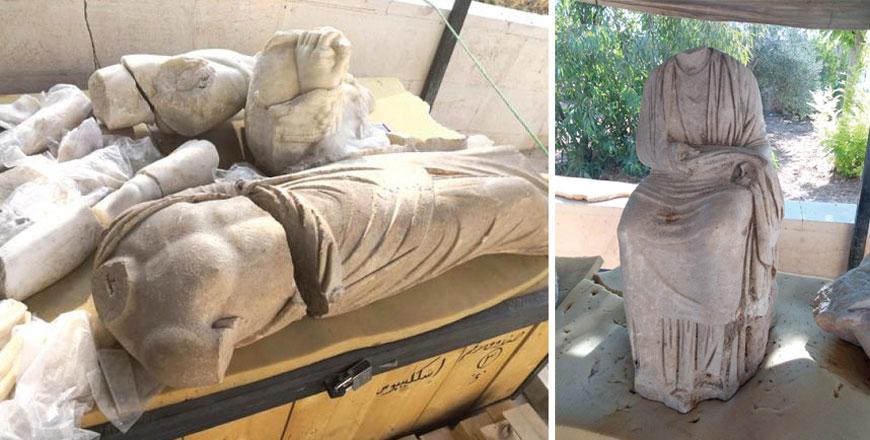 Zeus and Aphrodite Sculptures Have Been Discovered in Jerash

AMMAN — New archaeological discoveries in Jerash have been described as “priceless” by historians and archaeologists, among them was an almost-whole sculpture of the Greek goddess of love and beauty "Aphrodite".

For archaeologists, the sculpture of Aphrodite (Venus in Rome) is an unprecedented find in the Middle East.

According to Head of the Jerash Department of Antiquities Ziyad Ghuneimat, several full sculptures including that of Aphrodite, in addition to 14 other large pieces that are thought to be part of various unknown sculptures, were the findings of the three-year-long digging discovery.

“Aphrodite’s sculpture has an invaluable worth in the archaeological and historical world, so to find a whole sculpture of her is an unprecedented achievement," Ghuneimat told The Jordan Times.

"It is worth more than all our previous findings of rare jewels and treasure boxes," he added.

Thomas Weber-Karyotakis, a professor in archaeology and also the head of the team in Jerash, told The Jordan Times that this discovery is “very unique and very exceptional in the Middle East because similar sculptures were only found in Greece and Rome”.

Another discovery described as also “priceless” by Ghuneimat and his team of archaeologists is a sculpture of Zeus — the Olympian god of the sky and the thunder and the chief figure in Greek mythology. The sculpture will be displayed at the existing Zeus temple in Jerash.

Seven out of the "Nine Muses", the inspirational Greek goddesses, were also found in Jerash, according to Weber who expressed his concerns that the remaining two might be under modern buildings which are near the archaeological site. "We hope to find them before the digging process is finalised in November.”

In Greek mythology, the Nine Muses — the daughters of Zeus — ruled over the arts and sciences and offered inspiration in those subjects. They are Calliope, Clio, Erato, Euterpe, Melpomene, Polyhymnia, Terpsichore, Thalia, and Urania.

Ghuneimat predicted that this discovery will draw archaeological experts and gurus from all over the world to Jerash, "since it is now one of [the] place[s] with a full sculpture of the Greek goddess”.

Jerash Tourism Director Bassam Tobat told The Jordan Times that “the discovery will not only attract archaeologists, but also tourists”. The sculptures will be ready for show by November. "Displaying the newly-found Aphrodite sculpture in the Jerash tourist museum and the Zeus sculpture in the temple will add value to both these places.”