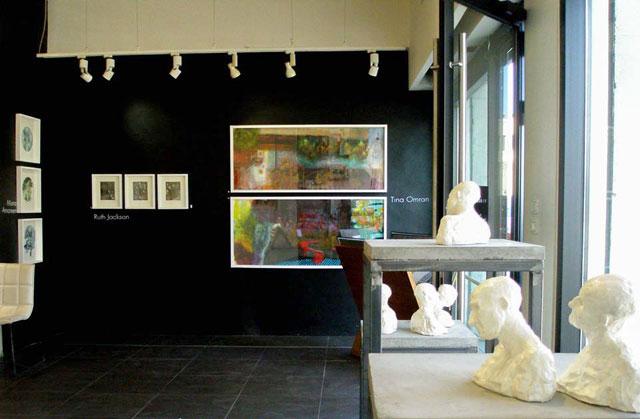 A printmaking studio opened by Jordanian Hakim Jamain in 2017, Bayt Al Graphic aims to “revive the art of printmaking through an open space where artists and people can experiment their talent through old techniques”, according to its founder.

“Nowadays, everything is digital, but this was the original way to create anything and I think that’s something we can’t forget,” Jamain noted in recent remarks to The Jordan Times, stressing that “this open studio doesn’t aim to be academic, it is a platform for artists to come and create together any artistic technique”.

Among the works undertaken with Bayt Al Graphic for the exhibition stood the mesmerising white sculptures of human faces, which caught the visitors’ eyes upon entering.

Next to them, the large colourful paintings of Tina Omran contrasted with the three black and white etchings of Ruth Jackson. Etching or the traditional process of using strong acid or mordant to cut into the unprotected parts of a metal surface was also picked by artists Sara Rashdan, Hamid Sharif and Nesreen Subeh as a preferred medium for this first salon.

Other emerging creators included Muna Amareen and Yasser Alwreikat, who presented detailed drawings of human faces and landscapes, while Sarah Hatahet chose to explore her digital portraits through “an explosion of colour”.

“Bayt Al Graphic’s first salon show aims to launch the works of 11 very different artists. Each artist has his/her own style with works ranging from etchings, to digital art to mixed media paintings and sculptures,” Jacaranda said in a statement sent to The Jordan Times.

For Kamal Khoury, who said he “has always been a keen follower of local and international artists” whom he is “fascinated by”, this exhibition was a great chance to see his work presented next to the creations of great talented artists.

“The art scene remains poor in Jordan and it is extremely hard to get known or noticed in this environment,” Khoury told The Jordan Times after the inauguration, stressing that “he does not consider himself as an artist but more of someone who plays around with the artistic media”.

“I think art is a form of play, at least for some school of art,” he pointed out.

The exhibition will run through November 16 at Jacaranda Images, according to the organisers.