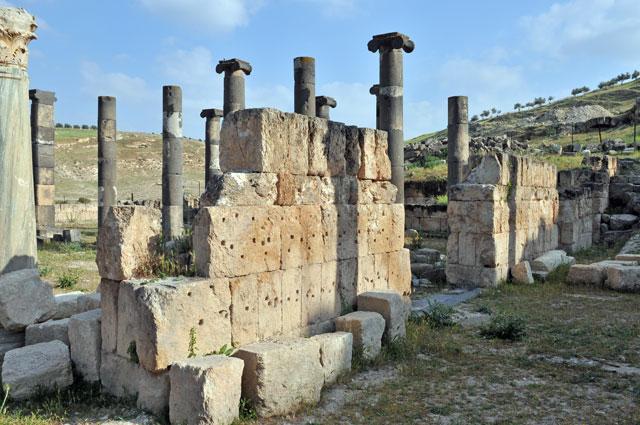 AMMAN — Jordan has an abundance of sites filled with Roman wall paintings adorning temples and necropolises, but paintings from later periods are often only found in fragments, according to a Polish conservator.

“These wall paintings show a rich repertoire of iconographic motifs and types of decorations, some of them, like the tomb of Beit Ras, being absolutely unique,” said Julia Burdajewicz, a conservator affiliated with the Academy of Fine Arts in Warsaw.

Thanks to the discovery and preservation of these monuments, scholars may state that the art of wall painting was flourishing in the Roman period in this area (1st century BC-3rd century AD), and that qualified artists and artisans were involved in their execution, noted Burdajewicz.

“If we try to look for wall paintings coming from the Byzantine period (roughly 5th-7th centuries AD), we find no spectacular examples comparable to the Roman period monuments,” she said.

“Nevertheless, there are numerous Byzantine sites in Jordan, and almost each one of them yields remains of wall paintings. Unfortunately, because they are usually small fragments detached from the walls, the archaeologists tend to neglect or even discard them as uninteresting. In fact, as I was preparing for this research and asking directors of these sites for permission to collect samples, some of them would raise their brows in surprise,” Burdajewicz said.

The goal of her research on Roman and Byzantine wall paintings was to collect samples from the Byzantine sites and to carry out an investigation on the technique used to create the paintings during the later period.

“As it turned out, the results shed some light on the possible reason why these paintings usually survive in such a fragmentary state in comparison to the well-preserved Roman wall paintings,” she said.

The investigated sites included Abila, Beit Ras, Gadara, Jerash, Deir ‘Ain Abata and Umm er-Rasas, she said, adding that with the use of different analytical techniques, “I managed to determine several features which seem to characterise the technique of execution of Byzantine wall paintings within this region”.

She found that artisans prepared plasters with very little filler, and “in some cases, they did not use any filler at all”. A plaster composed primarily from binder tends to be weak and prone to mechanical damages, according to the researcher.

While in the majority of cases, lime was used as binder of the plasters (just like in the Roman period), in some cases a mixture of lime and gypsum was used, or even only gypsum, she explained, noting that this decreased the quality of the plasters.

At the same time, a regional pattern could be noticed: “Gypsum was used above all in areas which are very dry. This results from the fact that lime production requires very high temperatures, and hence, fuel (firewood), which was difficult to acquire in arid, desert environments,” the scholar said.

“Finally, an important discovery was that almost all plasters contained organic admixture [probably chopped straws]. The admixture… was likely intended to increase their flexibility, but in the long term, it also had negative consequences. Over time the straws disintegrated and left empty spaces in the plaster making it more delicate and prone to damage,” Burdajewicz noted.

Jerash was one of the sites that Burdajewicz investigated in Jordan, however, it presented a particular value for this research because she could compare and investigate wall paintings coming from the Roman period (the Temple of Zeus) and from the Byzantine period (the Propylaea Church) to compare the technique used in their execution.

The conservator said that the comparison showed a significant drop in the “know-how” of the artisans in the Byzantine period.

The plasters from the church also contained almost no mineral filler but had chopped straws in them, she said, noting that the paintings from the temple were executed in fresco technique, while those from the church were painted in lime-painting — a much simpler and less durable painting technique.