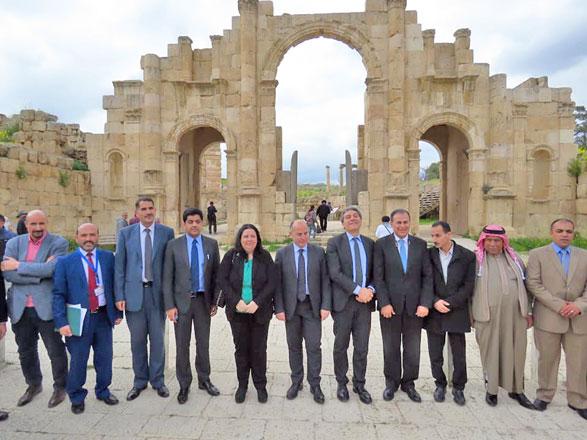 JERASH — The Ministry of Tourism and Antiquities on Tuesday launched the Jerash Centre for the Restoration of Ancient Artefacts project during a ceremony at the Jerash Department of Tourism.

The project, funded by a grant from the Italian government worth 3 million euros, will be implemented by the Tourism Ministry and the Italian Agency for Development Cooperation (AICS), according to Ziad Ghunaimat, director of Jerash Department of Antiquities.

The regional centre will be dedicated to training students and trainers on restoring and preserving ancient artefacts and sites, Ghunaimat said, adding that it will admit students from Jordan and from the region.

The Greater Jerash Municipality has already provided a building, constructed in the 1950s, to be used for centre. The building is currently being prepared by the United Nations Office for Projects Services, according to the official.

During the launch ceremony, Secretary General of the Ministry Tourism and Antiquities Issa Gammo highlighted the importance of the centre in preserving antiquities and diversifying Jordan’s tourism sector.

Gammo also voiced his appreciation for the Italian government’s support of the project.

Italy’s Ambassador to Jordan Fabio Cassese said the establishment of a centre to preserve monuments and carry out restorations would help maximise the historical value of the monuments and give them life.

He pointed out that the centre will provide certificates for students training in restoration.

Director General of the Department of Antiquities Yazid Alyan added that there are plans to improve the centre and eventually grant diplomas in the preservation and restoration of antiquities.

The ceremony included a presentation by AICS Amman Director Michele Morana, in which he said the centre represents an important step towards Jordan’s participation in the training of experts and professionals, and to strengthen the local community’s capacity to raise workers’ efficiency in the rehabilitation and restoration of sites and artefacts both locally and regionally.

The first stage in establishing the centre, which has been completed, was to select the site and prepare a plan of action for its construction.

The second stage, which is currently undergoing, includes the rehabilitation and maintenance of the building and the formation of a steering committee to follow up on financial and legal aspects of the centre.

The final stage will be to prepare a training programme for the students.