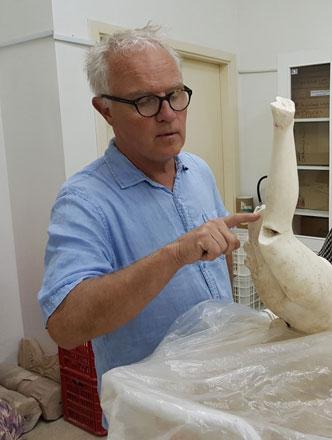 Key to Restoring Ancient Artefacts is Remembering Everything Is ‘Temporary’ — Conservator

AMMAN — During excavations in Petra, a team of researchers found two marble statues of the goddess Aphrodite in 2016, talks of restoration began and late last year the team turned to conservator Michael Morris for the project.

Morris, who collaborated with co-directors of the Petra North Ridge Project that excavated the site, is a professional restorer of ancient sculptures and architecture. He has worked on projects including Michelangelo’s Cupidon at the Metropolitan Museum of Art, the collection at the Yale University Art Gallery and a project at the Sackler Museum of Harvard.

“All excavated sculptures should be handled with great care to their surfaces,” Morris said, adding that dirt should not be removed until a careful examination of the surface and potential pigment has taken place.

Also, cleaning with water, or cleaning aggressively will remove pigment that is inherent to the meaning of the sculpture, the expert, who is an American Centre of Oriental Research post-doctoral fellow, explained.

According to Morris, the two Aphrodites needed to be seen in the context of other late Hellenistic Aphrodite/Roman Venus figures, such as the Capitoline Venus in the Louvre, or the Roman Statuette of Venus in the Getty collection with its painted marble.

In the past, repairing or conserving sculpture has been a process where holes were drilled into the stone, and pins were inserted and stabilised with either lead or plaster/ lime mortar, often with additives such as wax or the glue mastica, he elaborated. However, Morris said the sculptures found in Petra had original holes he used for his own pins.

“The problem with making your repair stronger with a metal pin is that when it falls again [and it will fall again] the repair will stay together but the marble will fracture at the end of the pin,” Morris said.

Furthermore, an iron pin which was used to fasten one of the sculpture’s segments was seriously corroded and broke the repaired top of the head and diadem into three separate pieces, he explained, adding that “because it is so completely corroded, we think this was the earliest of restorations; the first phase of repair”.

Morris said that the premise of restoration and conservation dictates that “everything you do should be reversible”.

In other words, when he restores an object, it should be in a way that allows “another conservator to take apart my work without affecting the object”, Morris said.

“Another premise is that what I do should not be a permanent artefact of the sculpture or alter the object. These are high ideals but one that we try to attain,” he underscored.

“The person that follows you should be able to take apart everything you have done with ease and without damaging the object, leaving the object how you once found it before conservation,” Morris concluded.