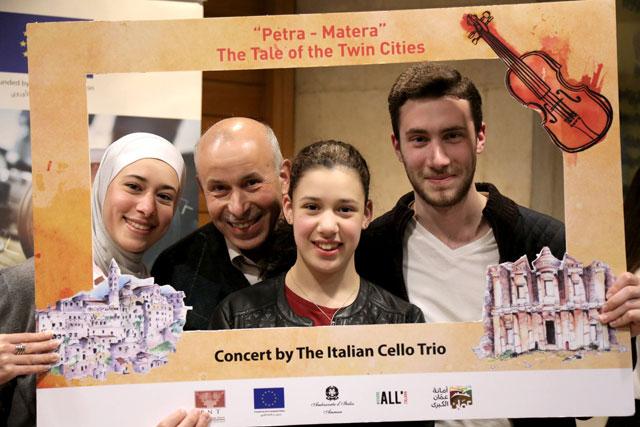 Amman — The Al Hussein Cultural Centre in Amman on Thursday played host to a concert by The Italian Cello Trio to celebrate the twinning of stone cities Petra and Matera, the latter of which is the 2019 cultural capital city of Europe.

A ceremony to mark the twinning was held at the Bait Yaish house in Jabal Luweibdeh before the concert and under the patronage of HRH Princess Dana Firas, chairman of the Petra National Trust.

The concert was organised in cooperation with the EU in Jordan and the Italian embassy in Amman.

Princess Dana, who is also a UNESCO goodwill ambassador, said: “We celebrate not only the twinning of Petra and Matera, which are two cities that share so much in common, but also the importance of cultural history and shared human values across our civilisation.”

The EU Ambassador to Jordan Andrea Fontana also addressed ceremony attendees and voiced pride in the joint efforts to preserve history and culture.

The ceremony also featured a number of paintings and drawings by Jordanian artist Kamel Mahadin, on his 20-year journey back and forth between the two cities, a statement carried by the Jordan News Agency, Petra, said.

Italian Ambassador to Jordan Fabio Cassese said “both cities are committed to promote a model of sustainable development, in which culture plays a crucial role”.

Petra and Matera were declared as twin cities in 2011.