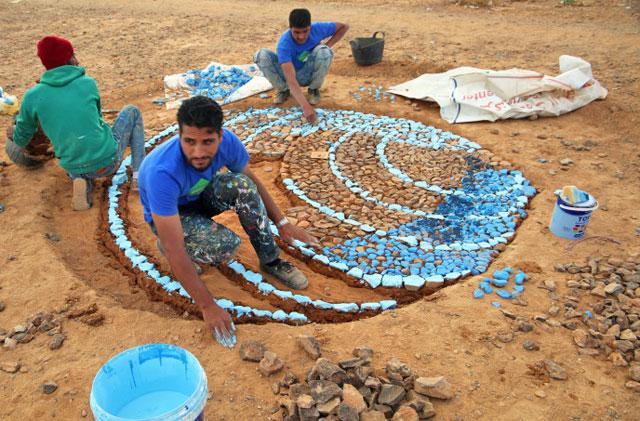 AMMAN — What once was a dull desert area in the middle of the Azraq refugee camp was transformed into a new space for art and community engagement by the London-based organisation Artmongers, recently.

During their sixth visit to the camp, the Artmongers’ team created sustainable “Azraq mosaics” with the help of Syrian refugee artists Samir and Abu Abdallah. Along with the camp’s residents, they transformed a vast area in the centre of the camp into a mosaic park that beautified the long routes refugees take every day to travel from village to village.

“It has been an experience of intercultural exchange,” founder and Creative Director of Artmongers Patricio Forrester told The Jordan Times during an interview on Friday, stressing that “what we did not want to do is to bring our own culture to the refugees, but to situate ourselves in the camp, develop everything as a team and create something together”.

Samir Al Ghafari, one of the Syrian artists residing at the camp, said that the technique utilised in the project “was very unique and useful — because we were able to create mosaics without needing many supplies”.

“During our work on the mosaics, we had a lot attention from the other camp residents, and our mosaics eventually became meeting points for people,” Al Ghafari added.

“This was such a big discovery for me, and I will also never forget a design that featured wool and knitting needles representing the women of the camp — especially after a lady approached us upon seeing the mosaic and told us: ‘You named me,’” he said.

But the mosaics were only a part of Artmongers’ work in the camp. During their 10-day visit, the organisation’s Research and Strategy Director Catherine Shovlin introduced the “Hope Circle” trolley initiative with the aim of connecting isolated women in the camp.

“I was shocked to find that many of the women never left their shelters, so we developed the Hope Circle trolley as a way of going to them,” Shovlin told The Jordan Times.

In addition, the expert taught four new trauma release techniques to staff and refugees, encouraging them to teach others, so the ideas can spread throughout the camp, according to Artmongers’ website.

Artmongers’ latest visit to Azraq refugee camp came after years of piloting creative ideas to improve residents’ well-being alongside the NGO CARE International in Jordan and the UNHCR.

“One of the first artistic activities started as a community initiative, when a small group of community artists approached UNHCR and CARE back in 2016 to seek support to paint some of the shelters,” UNHCR spokesman in Amman Mohammad Hawari told The Jordan Times.

“Since then, the agency has been supporting a variety of artistic activities, including creating a small workshop for community artists, based on their request, organising a talent show in the camp in 2017 and supporting artists to showcase their works at expositions and sell them at bazaars,” Hawari added.

CARE’s executive assistant to the country director, Sara Rashdan said that “art is one of the best ways to keep community members engaged, productive and filled with hope”, adding that “Artmongers was able to engage with residents in a way that made them feel ownership of their projects”.

In a similar vein, Shovlin noted that “the artworks have helped the refugees have a sense of identity, as putting their mark on what is a largely institutional space gives them a stake in it — a sense of pride in belonging”.

“For the men especially, who feel the pain of not being able to provide for their families, there is also a lot of satisfaction in working together, doing physical and creative work,” she added.

Forrester said one of Artmongers’ goals was “to make a familiar place look a little bit strange so that we can bring some newness and transformative energy into a place they are tired off, inducting some excitement”.

The project’s impact did not just affect camp residents, according to Shovlin, who said that “while it’s always good to feel that you are making a positive difference, I also really appreciate what the refugees have taught me about human warmth and compassion, and their ability to take joy in the moment despite traumatic pasts and uncertain futures”.

Artmongers’ work in Azraq traces back to 2014, when the organisation first asked the local community in London to support their goal to work in the camp.

“In a meeting in 2012, we identified that we would love to work in a refugee camp and share our experiences of turning dead space into live space, breathing energy and hope into it and changing how people feel about the space and what can happen there,” Shovlin shared with The Jordan Times.

Shovlin added that it took them two years to find the right opportunity.

“But once CARE Jordan said we could do a pilot visit to Azraq, we launched into an intensive 10 week period of fundraising, awareness raising and project planning,” she remembered.

Four years later, the team continues to visit Jordan every six months because they always “wanted a relationship rather than a one off,” Shovlin said.

“The human experience has much in common, and it is an important part of our storytelling back in our community in London to share these personal instances that help people relate to those in the camp as humans first, and refugees second,”Shovlin added.

“We always strive to come back, despite difficulties,” Forrester stressed,  calling upon individuals and organisations in Jordan to collaborate and support Artmongers’ work.

The founder also noted that the team hoped to be back in Azraq in April of next year, expressing goals to “continue our relationship with the refugees and staff in the camp, bringing a little joy and sense of community into a challenging situation”.