Jordanian archaeologists have discovered an ancient temple that was built in the Hellenistic era in the third century BC.

The archaeologists believe that the temple, located 120 kilometres north of the capital, Amman, was dedicated to Poseidon, the Ancient Greek god of seas.

Hellenistic pottery was also found on the site in Umm Qais which is also home to Roman, Byzantine and Islamic ruins. 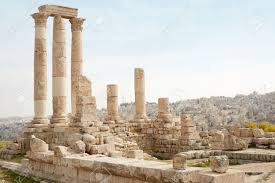 “Our goal in the end is to make the place available to tourists and to encourage tourism in Umm Qais. But we need to continue this project so we can discover the rest of the temple and the water tunnels,” says Atef Al Shiyab, Head of the Department of Archaeology at Yarmouk University.