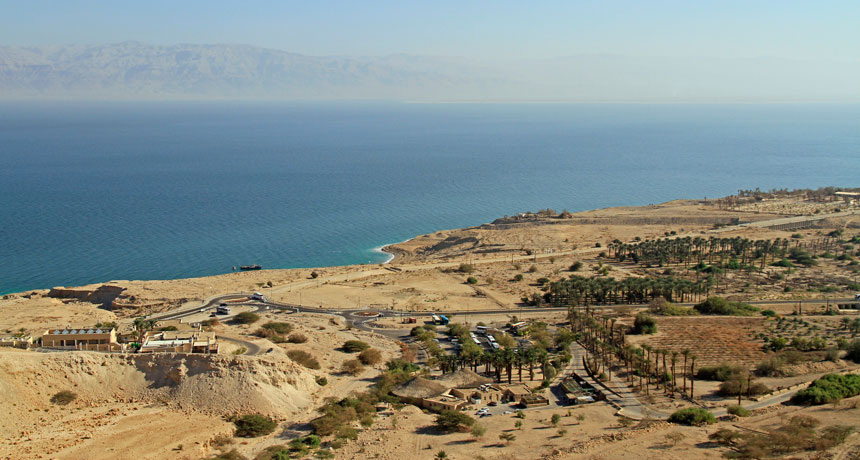 An Exploding Meteor May Have Wiped Out Ancient Dead Sea Communities

DENVER — A superheated blast from the skies obliterated cities and farming settlements north of the Dead Sea around 3,700 years ago, preliminary findings suggest.

Radiocarbon dating and unearthed minerals that instantly crystallized at high temperatures indicate that a massive airburst caused by a meteor that exploded in the atmosphere instantaneously destroyed civilization in a 25-kilometer-wide circular plain called Middle Ghor, said archaeologist Phillip Silvia. The event also pushed a bubbling brine of Dead Sea salts over once-fertile farm land, Silvia and his colleagues suspect.

People did not return to the region for 600 to 700 years, said Silvia, of Trinity Southwest University in Albuquerque. He reported these findings at the annual meeting of the American Schools of Oriental Research on November 17.

Excavations at five large Middle Ghor sites, in what’s now Jordan, indicate that all were continuously occupied for at least 2,500 years until a sudden, collective collapse toward the end of the Bronze Age. Ground surveys have located 120 additional, smaller settlements in the region that the researchers suspect were also exposed to extreme, collapse-inducing heat and wind. An estimated 40,000 to 65,000 people inhabited Middle Ghor when the cosmic calamity hit, Silvia said.

The most comprehensive evidence of destruction caused by a low-altitude meteor explosion comes from the Bronze Age city of Tall el-Hammam, where a team that includes Silvia has been excavating for the last 13 years. Radiocarbon dating indicates that the mud-brick walls of nearly all structures suddenly disappeared around 3,700 years ago, leaving only stone foundations.

What’s more, the outer layers of many pieces of pottery from same time period show signs of having melted into glass. Zircon crystals in those glassy coats formed within one second at extremely high temperatures, perhaps as hot as the surface of the sun, Silvia said.

High-force winds created tiny, spherical mineral grains that apparently rained down on Tall el-Hammam, he said. The research team has identified these minuscule bits of rock on pottery fragments at the site.

Examples exist of exploding space rocks that have wreaked havoc on Earth (SN: 5/13/17, p. 12). An apparent meteor blast over a sparsely populated Siberian region in 1908, known as the Tunguska event, killed no one but flattened 2,000 square kilometers of forest. And a meteor explosion over Chelyabinsk, Russia, in 2013 injured more than 1,600 people, mainly due to broken glass from windows that were blown out.