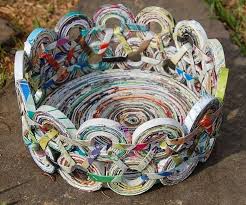 AMMAN — For many people in Jordan, old newspapers are usually discarded, burned, used for cleaning or repurposed to wrap delicate objects and protect them from breaking.

However, for some 50 women refugees and widowers, old newspapers were used for over a year to create artwork that helped them secure a decent living and learn a new profession through the Anamill (fingerprints in Arabic) project.

Anamill is an independently-funded community engagement initiative that was launched in Amman in 2017 by visual artist Wafa Fayyad, who specialised in early childhood education.

“I did not live all my life in Jordan, but I wanted to do something for women in Jordan, especially in the camps and the poorer areas, and discovered that many women needed to feel that they could work and make a difference,” said Fayyad.

Fayyad added that the use of newspaper in arts came to her when she was surfing the Internet one day and discovered that “a lot could be done with recycled newspapers, including arts”.

“I liked the idea and started weaving newspapers at home and creating artistic objects then I thought why not help empower other women by encouraging them to do the same and pay them... and this is how it all started,” Fayyad said.

The vision of the Anamill initiative was to work with economically disadvantaged women to develop raw materials from recycled paper, which are then professionally assembled to create unique and environmental-friendly handicrafts, decorative items and functional pieces, according to Fayyad.

“The idea behind the project was to alleviate poverty and enhance lives as we devote our efforts to making a lasting impact in our local communities,” Fayyad told The Jordan Times.

She added that Anamill currently employs over 50 women living in refugee camps across Jordan, as well as women living in impoverished areas of Amman, and the aim is to increase that number in the near future.

“We strongly believe in equal opportunities and inclusive education and therefore decided to dedicate a good amount of our training efforts towards young women with learning disabilities and special needs,” according to Fayyad.

Um Hassan, from Jabal Natheef in Amman, said she heard of the initiative from women in the community and decided to enrol in the programme to improve her financial status.

“I cannot leave the house because I need to be around my children, so this project was perfect for me because it also helped me engage with something useful rather than sitting at home doing nothing,” the 35-year-old mother of three told The Jordan Times.

Senior manager at Anamill, Sana Abdeen, told The Jordan Times that there are a large percentage of women from low-income families who are keen to learn new skills and at the same time improve their financial situation.

But due to “cultural considerations and circumstances many women are unable to leave their houses to take part in workshops and practical training”.

“This situation motivated us to think of a way to use our technical and artistic abilities in order to help these ladies generate a steady income without having to leave their homes and families,” Abdeen explained.

Kholud Hirbawi, 45, who lost her husband almost six years ago and has five children to take care of, was another woman who was benefitting from the project.

“I learned about this project from an orphanage centre in Jabal Natheef and decided to immediately enrol in the training because I wanted to take advantage of this new and unique opportunity,” Hirbawi told The Jordan Times.

The work of the women, which took almost one year to accomplish, was displayed at the local art gallery Dar Al Anda for free on Tuesday to support the community, the gallery’s founder Majdoline Al Ghazawi said.

“I was contacted by the group of ladies at Anamill and I loved the initiative because it is all about empowering women from underprivileged neighbourhoods,” Al Ghazawi told The Jordan Times.

She added that the women are supporting their families so the great thing is that “they are around their kids at home, and the Anamill ladies go to their houses to collect the weaved newspapers they have worked on”.

“It is also an important initiative since we lack the awareness related to recycling and this project is promoting the concept,” Ghazawi said.

The gallery founder added that she decided to support this project because “I believe that arts and culture should serve the community and this is what I was aiming for since the beginning of the gallery 20 years ago”.

Abdeen concluded by saying she is hopeful that “people will support us by buying the displayed products because by doing so they are supporting these 50 women and hopefully this will help us reach out to more women who are in need in our society”.

The products will be displayed at the Dar Al Anda gallery until November 19, according to Abdeen.