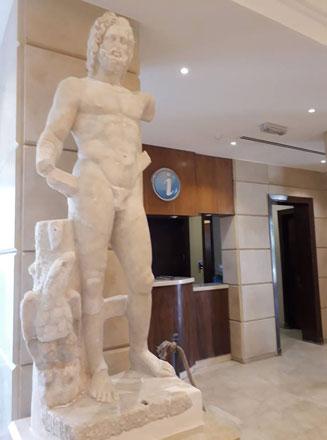 JERASH — After years of meticulous work, a French archaeological team that has been excavating the eastern Roman baths in Jerash, unearthed several intact sculptures from the Graeco-Roman period.

An event to showcase the sculptures was held on Wednesday, at the Visitor Centre in Jerash and attracted a large number of local and foreign stakeholders, including the French Ambassador to Jordan David Bartolloti, and the head of the Jerash Department of Antiquities Ziyad Ghuneimat.

In his speech, on behalf of Tourism Minister Lina Annab, Issa Gammoh, the secretary general of the ministry, said that several projects will be implemented next year to promote tourism in Jerash, such as revamping the Swam Souk as part of a project to connect the modern and the ancient Jerash, adding that today Jerash has around 250 tourist facilities.

The statues that were found together (27 of them in all), in a very small area of the Great Eastern Baths will “enrich visits to Jerash and enhance knowledge about the culture and heritage of Jordan for visitors, especially students”, Gammoh told The Jordan Times on the sidelines of the event.

“We worked from 2016 until 2018 with a German, French and Jordanian team, and it was impossible without help from the French ministry of foreign affairs and the Gerda Henkel Foundation,” said Professor Thomas Weber-Karyotakis, head of the French team in Jerash.

The statues represent Greek-Roman gods Aphrodite, a god of love, and Zeus, the supreme god of the Olympian pantheon, as well as muses sitting on thrones. The colossal figure of Aphrodite is made of Pentelic marble from the region of Athens, while the sculpture of Zeus was forged with marble from northern Greece, said Weber-Karyotakis.

Weber-Karyotakis added that the work of the team, lead by French scholar Thomas Lepaon and himself, was the continuation of research conducted by veteran archaeologist Jacques Seigna, who spent decades studying the rich cultural heritage of Jerash.

The statue of Aphrodite has a five-line Greek inscription on the plinth, which said the figure was donated by a local priest named Demetrios, according to the German expert, who noted that the inscription also indicates the unusually exact date of dedication, around March 20, 154 AD.

This monumental bathing complex — one of the largest and best preserved in the entire Orient — was built in the second half of the 2nd century AD in the valley of the Chrysorrhoas Brook, and then enlarged towards the end of that century or at the beginning of the following under the Severan emperors, the scholar elaborated.

He added that the construction work carried out in Severan period mainly concerned a pillared hall with exedra, which was built “attached to the north of the original core of the bathing complex”.

The scholar said that this hall was reminiscent of the “imperial halls” of the Asia Minor, was decorated with sculptures according to numerous statue bases, most of which had Greek inscriptions.

The aims of three excavations were to establish architectural connections between the bathing complex and the pillared hall and to find out more about the sculptural decoration scheme, Weber –Karyotakis said.

“An important member of the team was the Italian restoration expert, Franco Sciorilli, who spent 24 years working on different projects in Jordan and the region,” Weber-Karyotakis said, adding that although he is one of a few foreign experts, “after decades of work in Jordan, he feels like a real Jordanian”.