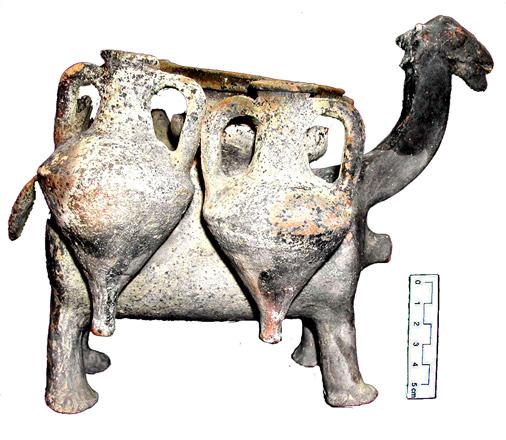 AMMAN — Archaeologist Ina Kehrberg-Ostrasz has recently delved into the findings of an excavation of a small tomb containing the single burial of a young child, which was accompanied by “unparalleled” gifts.

Kehrberg-Ostrasz said that the pottery assemblages from the undisturbed layers filling the chamber and the tomb in Jerash confirmed that the burial was from the second half of the 2nd century BC.

“In particular, four ceramic objects [in the tomb] drew our attention. There were three toy models of camels with Rhodian wine amphorae strapped to their sides, and each carried a Hellenistic crater on their backs,” Kehrberg-Ostrasz noted.

To complement the merchant’s caravan “toy set”, there was a pottery model imitating a copper clepsydra, she continued, saying that the camel models and most of the other vessels were made by a local Gerasene potter.

“The pottery fabric was ordinary or common Gerasene ware,” the Australian scholar said, adding that X-rays at the Jerash Hospital allowed the researchers to not only delve into the manufacturing processes behind the camels and clepsydra, but to also conclude that the models were toys and not used in funerary libations or as votive offerings.

Furthermore, the same kind of pottery models, albeit of horses and donkeys carrying amphorae, have been found at Carthage in tombs with child burials, which were interpreted by the excavators as toys of the deceased.

“The entire assemblage of the Gerasa burial bears the same characteristics suggesting the same interpretation,” the researcher said.

The scholar concluded that the Gerasa toy camels have no contemporary Late Hellenistic parallels or “cousins” in Jordan and the Levant, nor during the preceding earlier Hellenistic or later Roman and lastly the Byzantine period when bull pottery models were not uncommon.

“Unlike Roman Gerasa chamber tombs with well-sculpted heavy stone doors, it may be worth noting that the [tomb’s] doorway was blocked tightly with roughly-hewn large boulders wedged and held in place by an earth-clay binder,” Kehrberg-Ostrasz said.

She said that this may be due to it being a small chamber for a child, but the same kind of method of sealing was a commonly shared feature in the Hellenistic Mediterranean world. The other grave goods found at the site, like a strigil, gold leaved headdress and glass counters game were also very similar to items found from this time period.

“This underlines a Hellenistic date and, broadly speaking, a cultural linkage, as do the Punic parallels for a closer to home Ptolemic cultural commonality current at that time, even under Seleucid rule,” the scholar pointed out.

She added that the child’s toys probably represented the family to which the deceased may have belonged.

“I have argued in a recent article [published in] 2018, that the toys, the camels and the clepsydra in particular, are an imitation of the camels of the caravan owned by the [family] patriarch — a Gerasa merchant trader,” she said. “This is nothing unusual: We know of children in ancient Greece who had toy models representing the trade of the household.”

The toys can help determine the nature of some of Gerasa’s citizens, making the argument that the city was a caravanserai all the more plausible, Kehrberg-Ostrasz underlined.

There is also some evidence that suggests possible Ptolemaic Egyptian influence, not only because of shared political climates and relations in northern Jordan at the time of the burial, but also with regard to contemporary funerary rituals, she said.

Researchers’ first glimpse into the undisturbed burial chamber showed that it was tailored for a single burial, the scholar said, adding that further examinations revealed the age of the child was eight to 10 years old.

The date of the burial was also corroborated by a coin of Demetrius I, found at the feet of the deceased.

“Most of the grave goods... convey the intended message that the child belonged to a wealthy family and the aspiring middle class of the Late Hellenistic town,” Kehrberg-Ostrasz concluded.