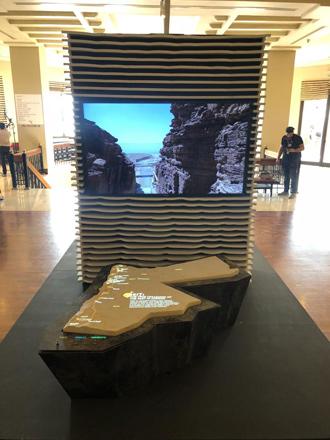 The design is that of Hashem Joucka, lead designer and team leader of a Crown Prince Foundation initiative called Techworks.

The map is the third of its kind that Joucka has designed, one of which is on display at the Jordan Museum, while the other was shown at the World Science Forum in 2017.

“The maps can be customised for different purposes. The one in the economic forum, for example, is built with its three layers to attract investors,” he told The Jordan Times over the phone.

His design was brought to life at Techworks’ fabrication labs, (widely known as “fablabs”), which were created by the Crown Price Foundation in May of 2018.

The facilities are open to students, individuals, start-ups and companies looking to bring their ideas to life. According to their lead designer, innovators are offered the chance to meet with prospective investors through Techworks.

“The labs are open to everyone, regardless of age, sex or educational background. Students and start-ups are allowed to use them for nominal prices, while big companies have to pay for the machines and materials provided,” Joucka said.

He added that the platform is not about “mass production”, but rather about “expanding the culture of making”.

Joucka said that when he was just starting out on his own, he faced difficulties when dealing with the industrial cities of Sahab, Bayader and others. “Half of my time was spent commuting. That is very impractical when you have deadlines to meet.”

She said: “The laser machine I use to mould the concrete, and the other machines for engraving the writings, are all available, which is very convenient. I have been using them since September.”

“We need to allow our youth to explore new technologies so that they know it is not at all complicated or out of their reach. Only through that will they start innovating,” Joucka concluded.