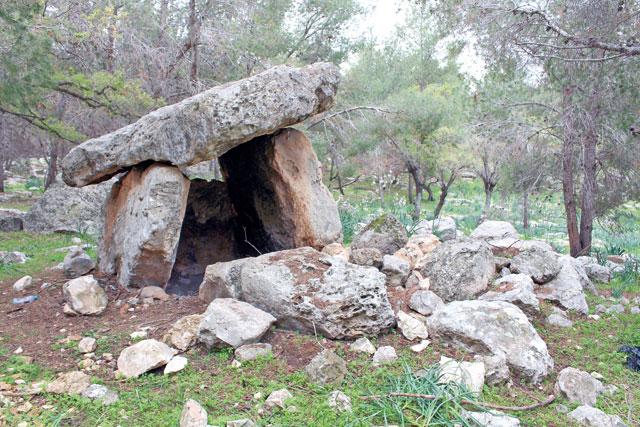 Scholar Believes He Has Answer to Jordan Valley Dolmens’ Exclusivity

AMMAN — Dolmens, above-ground tombs made of giant slabs of stone, are scattered throughout northwest Jordan, but their absence from other areas have perplexed researchers, until recently.

A dolmen is an above-ground, single-chamber megalithic tomb, consisting of two or more vertical megaliths that support a large capstone. Most of the Levant’s dolmens are located on the eastern side of the Jordan Valley.

“Most dolmens are found between the Jaulan Plateau and the Madaba plains,” said Australian archaeologist James Fraser, adding that although some are found west of the Jordan River in the Galilee region, most so-called “dolmens” identified in Israel and occupied Palestine are probably other features built from large stone blocks, but do not resemble the table-like dolmens of Jordan.

The scholar, who received his PhD from the University of Sydney, thinks the dolmens’ regional exclusivity is because of two factors. Firstly, the tradition of dolmen building, 5,000 years ago, was a local tradition and communities that built dolmens did not extend west of the Jordan River.

Fraser currently directs the Khirbet Ghozlan Excavation Project with the British Museum, investigating Bronze Age olive oil production in Jordan at around 2,000 BC. He also worked at a dolmen site in the Wadi Rayyan area of the Jordan Valley.

The scholar tried to link dolmens, settlements and geology at the Wadi Rayyan site: “I propose that every single dolmen field in Jordan is always found near villages and towns that were occupied in the Early Bronze Age I period [3,700-3,000 BC].”

According to Fraser, the dolmen fields served as cemeteries for these communities.

Geology might be the answer, he continued, noting that “when Early Bronze I sites are located on areas of very hard bedrock, people constructed above-ground tombs, which is the case in the Wadi Rayyan, where dolmens near the modern town of Kufr Abil are surrounded by several village sites on hard limestone bedrock”.

However, no dolmens are found in nearby wadis, such as Wadi Ziqlab or Wadi Yarmouk, Fraser elaborated, “even though these wadis were also occupied at the time”.

“This is because the bedrock in these wadis consists of softer marl and chalk formations so it was far easier for ancient people to cut into these softer rocks to create below-ground chambers,” Fraser explained.

One dolmen near Tal Al Umayri, on the Madaba Plain, was discovered unrobbed in the 1990s, the researcher said, adding that this dolmen contained the remains of over 20 people.

“The fact that the remains were mixed, and the fact that they appeared to have been interred with very similar burial goods, suggests that they were of the same social class,” Fraser underlined.

However, burials in below-ground tombs at Bab edh-Dhra, near the Dead Sea, contain no evidence to suggest the burial of people from different social classes, he said.

“Did the same processes happen in the dolmens? Although we don’t know for sure, I think that it is very likely.”

Moreover, in large concentrations of dolmens, some dolmens still cluster together like small family tombs, the archaeologist outlined, adding that they appear to have been constructed so that one short end could be temporarily sealed by small rocks or mud, so that people could reopen them to continue to bury family members over a long period of time — perhaps several generations.

“Dolmens are a remarkable part of the rich heritage of Jordan. They show how ancient people were very innovative in how they used their natural environment in their daily lives. Dolmens also show how people shaped the landscape around them,” Fraser said.

“A hillside covered in dolmen tombs would have had special meaning... which probably continued long after the people who constructed the dolmens were dead and forgotten.”