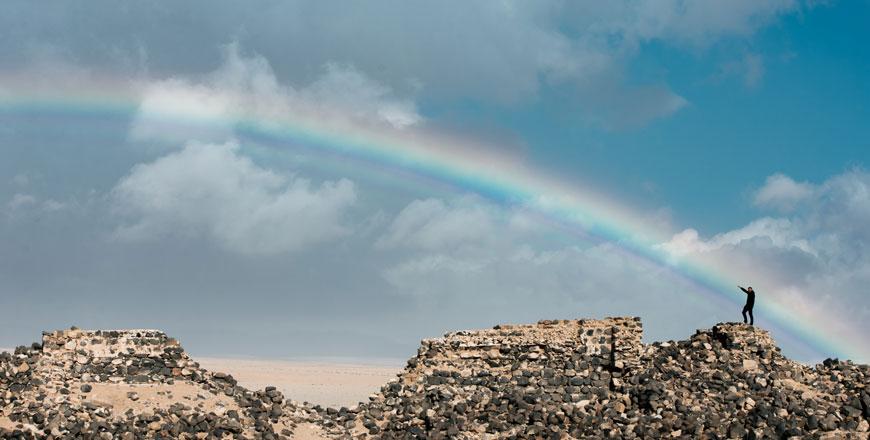 AMMAN — A team of Polish archaeologists recently unveiled the largest discovered Neolithic settlement in the mountain valley of Munqataa in southern Jordan, some 170 kilometres from Amman.

Organised around a central building that may have been a temple or a chief’s dwelling, the newly discovered site suggests that the early farmers cultivated plants on patches of flat ground among the rocks and kept flocks of animals. Polish archaeologist Piotr Kołodziejczyk, told The Jordan Times in a recent interview that the settlement also confirmed that shepherding was well-developed in the valley at that time.

Grindstones and arrowheads as well as a considerable amount of ceramics probably used as storage for food supplies were also found, according to the researcher.

“Reaching the Munqataa mountain valley was both a scientific and a logistical challenge,” Kołodziejczyk pointed out, noting that descent into the valley was possible only through a steep path on a 100-metre-long ridge, during which the researchers had to carry equipment, food and water supplies.

Led by Kołodziejczyk, the mission brought together several archaeologists from the Jagiellonian University in Kraków, who conducted research at the sites of Munqataa and Faysaliyya (some 200 kilometres south of Amman) over the past year.

In Faysaliyya, near the Shobak Desert, the team of archaeologists unveiled an economic complex, in addition to a large farmstead with utility and residential rooms.

Kamil Kopij, a Polish specialist in Roman archaeology, told The Jordan Times that the mission had also started exploring a Roman fortress in the district of Dajanieh and the town of Tuwaneh. “This year has been mainly devoted to documentation using new methods, such as laser scanning, as our aim for this campaign was to determine the heritage in the unknown sites and prepare maps”.

In addition, a specialist in medieval archaeology conducted research in Qasr Deir, which found pottery from the Byzantine and late Islamic periods. “However, we still need more information on the transformation from the Byzantine to the Islamic period,” said Przemyslaw Nocun, chair of Medieval Archaeology at Jagiellonian University, noting that the aim of the next year was to complete the documentation of the site and to determine whether a late Roman period took place in Amman.

The team, along with other researchers of the archaeology sector in Poland, will be showcasing their findings in a joint scientific session and photography exhibition at the Hashemite University on Sunday, which comes as part of celebrations commemorating the 100th anniversary of Poland’s independence.

“The Polish archaeological tradition in Jordan dates back to over 30 years ago with the first mission in Jerash,” senior researcher at the Polish Centre of Mediterranean Archeology (PCMA), Zuzanna Wygnanska, said, recalling how Polish researchers began joining bigger missions focusing on Islamic architecture.

However, the mission faced drawbacks and was paused for several years, until Professor Jolanta Mlynarczyk of the University of Warsaw took over the project in 2014 through cooperative efforts between the PCMA and the Jordanian Department of Antiquities.

The mission then focused in on the site of Beit Ras, some 80km north of Amman. The research programme’s main objective was to establish the nature of architecture once present at the northern slope of the hill occupied by the ancient city of Capitolias (now Beit Ras).

“The results of the mission in Beit Ras confirmed the existence of early artisanal activity in the area, which was famous for glass production,” Mlynarczyk told The Jordan Times, highlighting the findings of pottery, glass and lamp production dating back to the 6th century AD.

Asked about the mission’s future steps, the archaeologist noted that the team had recently started excavating at the site of Beit Sara (Bayader) in west Amman, highlighting the importance of the area due to its strategic location between the capital and the Jordan Valley and its relation with the Iron Age.

Kołodziejczyk stressed the scientific importance of southern Jordan, pointing out that “civilisation was born in these areas, agriculture and craft production technologies were developed, long-distance trade flourished, and the first urban centres appeared”.

"We intend to start excavations at three other sites in Tafilah Governorate in the coming years,” the archaeologist said, noting the team’s aim to “create a holistic image of late prehistory Tafilah to compensate for the current lack of information”.

“The south of Jordan is in dire need to be explored quickly before construction destroys the valuable heritage,” Kołodziejczyk stressed, expressing hopes to contribute to Jordan’s historical story and support the preservation of Jordan’s settlements.