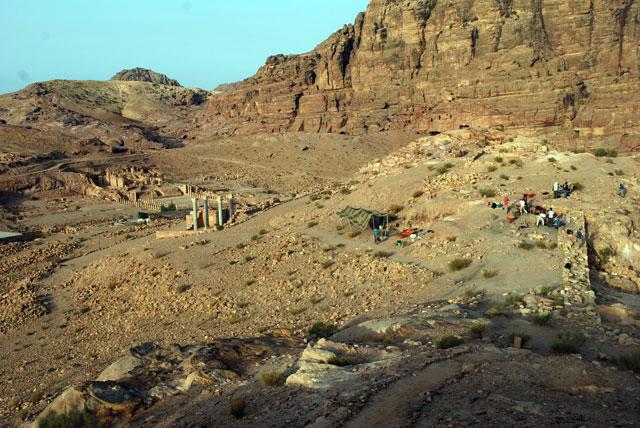 AMMAN — Petra’s monumental tombs represent a familiar sight for researchers working in the area, however, less familiar are the chambers cut into the bedrock along the escarpment of the area’s North Ridge and left behind by the site’s inhabitants.

“These tombs were dynamic spaces in which the living and the dead interacted on a regular basis during the period of use,” said Professor Megan Perry from East Carolina University.

In general, three forms of Nabataean burials exist in the archaeological record, Perry elaborated: “These include burials in large, monumental tombs with intricately carved facades [such as at Petra and Madain Saleh], burial in communal shaft tombs and single burials in cist tombs or coffins.”

However, another type of burial is commingling, and it is a well known practice in the Near East, according to the researcher.

“There are many causes of commingling of human skeletal remains, but purposive, mortuary-related commingling is an indelible part of Near Eastern mortuary ritual,” she said.

The practice of commingling can help explain the mortuary behaviour, social identity and meaning of corpses after their death, Perry underlined.

For example, an articulated skeleton (a fossil skeleton found in one piece with the bones still arranged in the proper order) is more easily tied to an individual identity, especially when an object linked to them is buried with them. However, once the bones of an individual is buried with others in a communal tomb, a new identity is created, she said.

The reuse of the tomb over a longer period of time is one of the reasons for commingling of bones, according to the researcher.

However, in order for researchers to interpret the ritualism behind commingling burials, they first have to determine if a burial was originally constructed using the method. Sometimes sites have fallen victim to looting or natural events in the past that resulted in a burial being disturbed.

“These disturbances have resulted in commingling of skeletal material, often incorrectly interpreted as a secondary burial,” Perry said.

For grave robbers, gold and other valuable items are their main goal, however they leave behind the “rich ceramic and bio-archaeological data”, Perry added.

Most tombs in Petra contained both undisturbed and commingled skeletons, as well as ceramic objects, the scholar continued, adding that it was previously believed that Nabataeans did not practice cremations in Petra. But when British archaeologist and architect George Horsfield found traces of cremation at two graves in the site, it muddled what researchers thought they knew about Middle Eastern funerary practice.

“The descriptions [of the two graves found] provide tantalising but insufficient evidence for the practice of cremation at Petra. For example, the burn pattern [found in one of the graves] suggests the deposition of burning material over the skeletonised bodies, rather than incineration of the corpses themselves,” Perry elaborated.

Researchers attributed these practices to the Roman military.

“Unfortunately, no cremations in Petra have been analysed well enough to help us better understand this infrequent, and likely foreign, funerary custom,” Perry underlined.

During an excavation of the ridge’s church in 1998, the research team unearthed the entrances of two Nabataean-period shaft tombs, she noted.

“The opportunity to excavate a Nabataean tomb within Petra properly, and to analyse the human burials and material culture it contained, was an exciting one. Records of past Petra tomb excavations are rare and have never included an adequate human osteological study,” Perry said. “The contents of the tombs contained much more information than we imagined.”