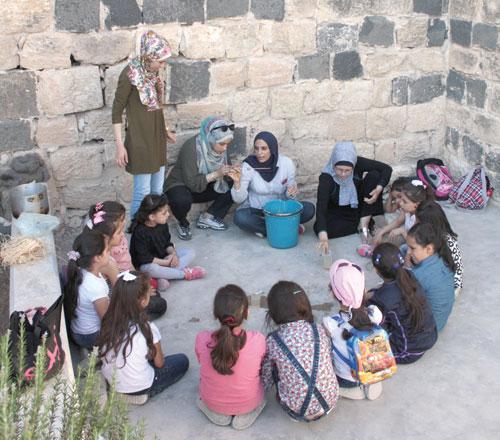 AMMAN — An exhibition organised for the Atharafoqa area, in the northern part of Umm Qais, was the crown jewel of seven years of cooperation between a German research team and the local community.

“Central to this story [exhibition] is its people, its history, its archaeology, nature and environment — in short, the cultural heritage of this fascinating region,” said a scholar from the German Archaeological Institute in Berlin.

From the beginning, sharing the results of their research with locals at joint meetings was very important, as was enhancing awareness of the area’s rich natural and cultural heritage, said Claudia Bührig and Frank Andraschko, the project’s directors. Some objects found in the area were from the Palaeolithic period and were more than 50,000 years old, they added.

Started in 2015 with an emphasis on children, the directors returned for three consecutive years and held eight workshops involving nearly 80 participants.

An education programme to teach people of the Jordan and Syria’s cultural heritage even sprung from the original idea, the founders noted.

Archaeological science was taught to Jordanian and Syrian schoolchildren, as well as adults, who had a chance to learn more about the history of old Near Eastern settlements, Bührig and Andraschko said.

“In our ‘Train the Trainer’ programme, we had lectures about the archaeology and history of Umm Qais at the Royal Society for the Conservation of Nature, and visited the museums of Umm Qais and Irbid, as well as the archaeological sites of Umm Al Jimal and Abila, The Jordan Museum and the Children Museum in Amman,” Andraschko highlighted.

At the same time, the German researchers looked after the preservation of buildings that are over 2,000 years old, from the Hellenistic-Roman city in the area, she explained.

“For this purpose, a second training programme for Jordanian and Syrian craftsmen and young adults was established. In this programme traditional stonemasons’ techniques are trained by and practised with German experts,” Bührig pointed out.

The aim of the programme was to cautiously build up a pool of knowledge and practical experience, since this knowledge can be used for the planned protection and conservation of the site, she noted, adding that “in this way we can protect the tangible and the intangible cultural heritage”.

The initiative, which was financially supported by the German foreign office, included the culminating exhibition, “Umm Qais — Old Tales”, where the research team collected private historical photographs and displayed them for the first time.

It also showed historic household items to give visitors an idea of what life was like before modernisation. Visitors also sampled old dishes and heard tales from local storytellers, the researcher underlined.

“In the experimental and archaeological hands-on programme, children can experience the handling of wool, clay, fire, a bow and arrows as if it was 3,000 years ago,” Andraschko emphasised.

Regarding future plans, the German research team said they plan to install the area of Gadara/Umm Qais as a model for sustainable development.

“The aim was to cautiously build up a pool of knowledge and practical experience; this knowledge can [now] be used for the planned protection and conservation of the site. That is why we have also established a stonemason training programme in Gadara, while the programme will continue in 2019,” Bührig concluded.