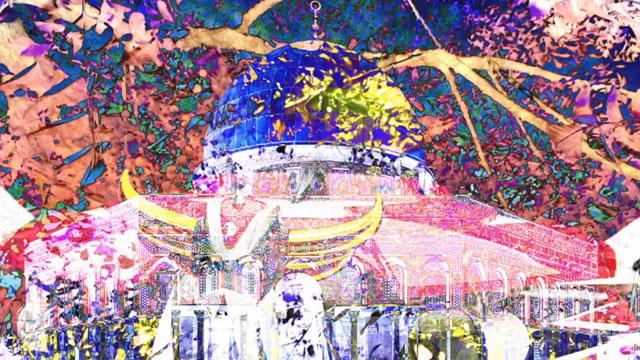 AMMAN — Art lovers on Tuesday evening flocked to the iconic Darat Al Funun — Khalid Shoman Foundation in Jabal Luweibdeh, where they witnessed the unfolding of the third and last iteration of the art foundation’s 30th anniversary celebrations, held under the theme “Truth is black, write over it with a mirage’s light”.

A tribute to Palestinian author Mahmoud Darwish’s famous poem “To a Young Poet”, the three-part exhibition spanned over the course of a year, starting between February and May for the first show, and in July-October for the second iteration.

“This exhibition comes following an open call we launched last year, inviting emerging and established artists' creations as inspired by the words of famous Palestinian author Mahmoud Darwish in his poem ‘Truth is black, write over it with a mirage’s light'," Luma Hamdan, managing director at Darat Al Funun told The Jordan Times recently, adding: "We aim to celebrate all those who believed in our vision and who accompanied us on our journey. This includes both internationally famous artists such as Riccardo Matlakas from Italy and the UK and South African James Webb, and the new generation of artists, who are engaged witnesses of the present and an inspiration for the future".

Spread over the four houses composing Darat Al Funun’s complex — the Main Building, the Blue House, The Lab and Beit Al Beiruti, the former house of late King Hussein's mother Queen Zein — the exhibition encompasses a wide range of artistic media such as paintings, films, sculptures and sound installations, among others.

“As in the two previous iterations, this third exhibition does not offer one reading of the past or the present. The artists offer a multiplicity of perspectives and present a wide variety of practices that reflect the complexities of our world and our time,” a statement by Darat Al Funun said, noting that “together the exhibitions form a constellation of new narratives and interrogations, while allowing scope for paradoxes and intricacies to emerge”.

Among the works showcased in this third exhibition, Palestinian Ahlam Shibli’s photographic series “Occupation” allows the visitors to explore the damage caused to Palestinian livelihoods in Khalil/Hebron and the territories occupied by Israel.

“The photographs record the signs of a disturbing duplicate inversion, among other things. On the one hand, the images indicate how the settlers — who have invaded the Palestinians' territory preventing them from using their property and disrupted their freedom of movement — create a prisonlike space for themselves,” the text accompanying the artwork stated, adding that “on the other hand, the photographs reveal how the Palestinians use the hardware of the separation implemented by the Israeli occupation to protect their own public spaces and their homes”.

Also choosing the photographic lens to express her views of the Kingdom, American Jordanian Sima Zureikat offers a reflection on displacement and evolution, while Jordanian Moawia Bajis captures the complexity of Amman in a sound installation that attests to the city’s political, social and cultural transformations.

To mark the importance of this last anniversary celebration, a musical performance by sopranos Tania Nasser and Mariam Tamari followed the show opening, inviting the public to dive into the depth of artistic creation in all its forms.

Nasser, who performed the very first concert at the archeological site of Darat al Funun in 1993, on Tuesday re-enacted three of these original songs, accompanied by pianist Agnes Bashir.

Nasser’s niece, soprano Mariam Tamari, later mesmerised the audience with a French repertoire elegantly merged with her own Arabic compositions.

The concert ended with a duet arrangement of the song "Al Quds Arabia"  by the two relatives, “upholding continuity and the transfer of artistic experiences from one generation to another”, together with composer Rima Nasir Tarazi.