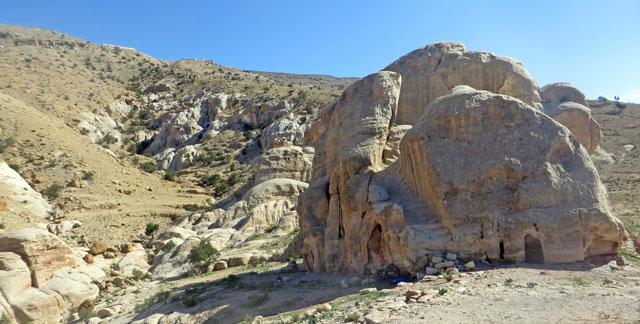 The Wadi Musa-Tayiba Rajef Highway defines the upper boundary, while the Siq gorge formulates the lower segment of the catchment, Catreena Hamarneh said at a lecture titled, “Petra Landscape between harnessing and co-existence: Quntara-Hremeyyeh catchment area as a case study” and held at the German Protestant Institute of Archaeology.

“The wadi flows from the mountains all the way down to the Treasury at the entrance of Petra causing torrential flooding,” elaborated Hamarneh, a University of Jordan graduate.

The overall catchment area is small, less than 5sq.m. but it contains a number of geological formations, Hamarneh noted, saying that the Nabataeans’ water management works reflected the importance of the area.

“Their intervention within the catchment area started around the 1st century BC and intensified during the late Nabataean-Roman period [50 BC – 112 AD], resulting in rich archaeological elements found within the site,” Hamarneh underlined.

Despite the fact that several travellers and scholars have studied the site, she elaborated, their work focused on individual aspects or elements such as inscriptions or tomb facades.

A full survey of the catchment area, conducted by the German Jordanian University and funded by the American Ambassadors Fund for Cultural Preservation, collected soil samples and mortar for analysis, “which helped reveal much about Nabataean surface management and intervention policies”, the scholar underlined.

For example, Nabataeans directly intervened with the area’s topography: “First, the narrow wadies were chiselled to widen their path, thus slowing the water, which would minimise its strength, along with a set of check dams which prevented the flooding of the Al Khazneh [The Treasury] Plaza, and helped collect water for further use for agro-pastoral activity. The second was the construction of a set of contour terraces at the upper catchment, which not only minimised sheet flow and collected sediment, but  also created a built up that minimised the high relief,” she outlined.

However, the original plans might have been different, she continued, as the survey showed that the original intent was to construct an aqueduct through the Hremeyyeh catchment.

“To protect the line, several terraces where constructed to prevent its further damage by torrents,” Hamarneh explained, adding that in “the heydays of the catchment area, which were in the 1st century BC to 1st century AD, a small shrine and several divine representations appeared”.

Furthermore, water-harvesting systems and agricultural installations such as wadi terraces, a press and silos were constructed,  which were managed by the inhabitants of the Ayn Braq settlement, Hamarneh underlined, noting that the analytical study has shown that the construction of the terraces changed not only the area’s surface morphology but also its soil quality, making it “more suitable for cultivation”.

Terracing also helped keep the soil moist, a fundamental need in an arid environment such as Petra, she underscored.

With the annexation of Arabia by the Roman emperor Trajan in 106 AD and the ban of private cults, the site of Wadi Hremeyyeh transformed from a cultic agrarian location to a domestic site which was shortly abandoned afterwards, she said.

“It was only around the Ottoman period that the site was revitalised as a pastoral area inhabited seasonally by local tribes as evident from graffiti left in the caves,” Hamarneh concluded.