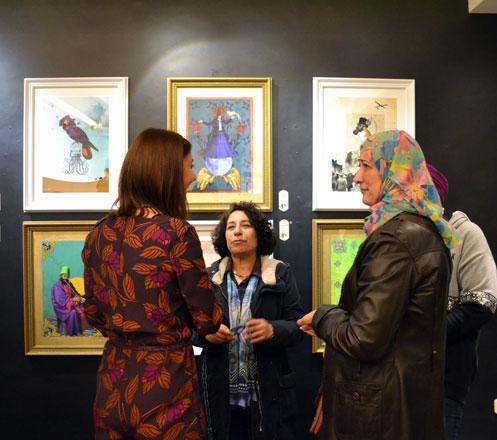 AMMAN — The allegorical journey of the soul into unity and transcendentalism in the mystical epic “Conference of the Birds” by Persian Sufi poet Farid ud-Din Attar is now to be experienced in the duo exhibition by digital artists Zaina El Said and Mo Awwad.

With their duo exhibition titled, “Conference of the Birds”, the two artists said in an interview with The Jordan Times that their prints have but one goal: taking viewers into a deep experience of universality, astonishment and a state of detachment from the materialistic world to spirituality.

Currently held at the Jacaranda Gallery in Jabal Amman, the exhibition displays a number of Sufi-inspired prints, mimicking Attar’s “Conference of the Birds” and illustrating the “timeless” teaching of his narrative poem.

“The works are illustrations of my understandings for these spiritual writings. Happiness can be found in oneself, as God resides in oneself. There is no ‘individuality’ in this work as it is inspired by understanding that makes you realise the realm of universality; the beauty of it, meaning  you forget about your own identity. You have to dissolve to make the work speak for itself,” Said said when asked about her personal involvement in the creative process.

Contrary to Said’s views on individuality and fanatic neutrality, Awwad focused on Arabic elements to give his work an identity.  Asked about the validity of such preservation in an era of globalisation, Awwad answered: “In this field of art, it is very common to see non-Arabs. I want to show that there are creative Arabs as well. It is even an advantage when it comes to collectors.”

On whether his signature on his digital prints contradicts with the universal theme of the exhibition, Awwad noted: “My signature on my works does not contradict their universal value though it might express some kind of individualism. I use my signature to protect my work from being reprinted via social media platforms.”

Said expressed positive views on the effect of social media on artists: “In return for the hardships of maintaining a career as an artist in Jordan, the Internet has helped me establish an international audience.”

“With the Internet it doesn’t matter where you live. It is now easy to promote yourself.”

Said, who studied business administration, said she had her first encounter with the practice of art almost a decade ago. As most of her family members are involved in the art practice, Said shifted her career focus to visual arts, finally resorting to collage as her main medium after several experimentations.

“For some reason, the different textures, the idea of not being limited to a certain time, space and dimension made surreal collage appealing to me. The eternal possibilities for my imagination to manifest in collage and the space for experimentation is my motive behind choosing this medium.”

Awwad said his preference for such a medium is influenced by his career as a designer and the environment in his home. “Living with so many siblings, there was an abundance of unused books and magazines which pushed my creative urge to experiment with collage.”

“Their concept is compelling and suitable for the technique they chose. We were sure they will produce impressive works that deserve a show on its own. We always support the artists that were first established and presented to the Jordanian art scene through our gallery,” Mary Abu Zaid, curator of the show, said.